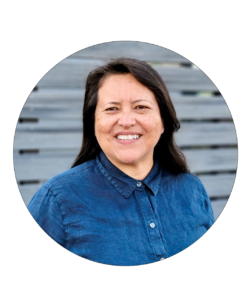 Lydia L. Ramos-Mendoza is an executive coach and communications consultant with three decades of combined experience in the journalism and education fields.  She helps leaders live and lead from their essence.

The third generation Mexican American is particularly focused on ways to directly impact leaders committed to anti-racism. She believes everyone is creative, resourceful and whole, and works to help leaders draw on their personal and professional strengths to design new ways of thinking and executing that include and celebrate marginalized voices.

Ramos-Mendoza started her journalism career as a reporter covering education and the Latino community for the Los Angeles Times. She transitioned to broadcast journalism as a producer for NBC News, covering national news, presidential politics, foreign affairs, and terrorism in the Burbank and Washington, D.C. bureaus, serving as producer to Andrea Mitchell and Gwen Ifill. She also helped launch MSNBC and later produced  “Nueva America,” an NBC News documentary about the emergence of Latinos in politics, culture and entertainment.

In 2001, she left journalism to teach English and journalism at her alma mater in Los Angeles, Phineas Banning High School. She then served as a spokesperson, director of internal communications, special assistant to the superintendent, and director of communications for the Los Angeles Unified School District (LAUSD). Ramos-Mendoza also assisted former Boston Public Schools (BPS) Superintendent Tommy Chang with strategic communications, executive coaching for 10 BPS cabinet members, and supporting his vision to bring equity, coherence and innovation into Boston’s schools as senior advisor to the superintendent between 2015-2017.

Ramos-Mendoza earned her bachelor’s degree in Print Journalism in 1991 and her master’s degree in Education, Learning and Instruction, in 2004, from the University of Southern California. In 2018, she earned Harvard Business School alumni status with executive education coursework focused on leadership development, public education and behavioral economics. She earned her Leadership Coaching Certificate from Georgetown University’s Institute for Transformational Leadership in 2019 and her Associate Certified Coaching (ACC) credential from the International Coach Federation in 2020. She lives with her wife, son and two dogs in Long Beach, CA.